Have you ever battled a home appliance? I have. And I’m proud to say, I won. Here’s how it went down. 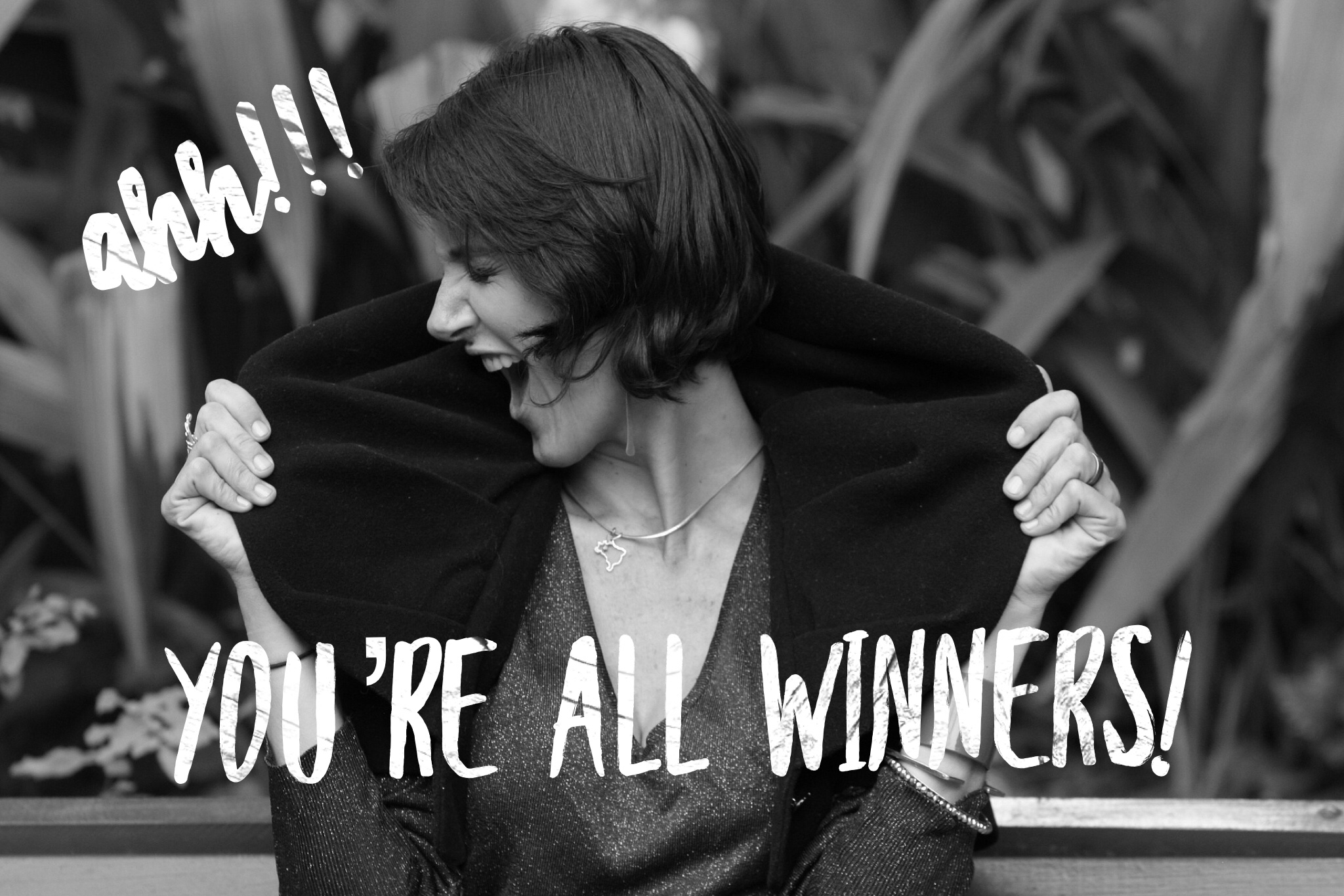 I took on the wretched task of cleaning the house while my husband took the kids to the clinic for their annual flu shots. Over the last week, my mother came to visit from Texas, my mother-in-law had her annual Christmas hoedown, and my daughter broke her leg skiing. The house was a disaster and with all that going on, cleaning it fell to the bottom of the totem pole of priorities.

I took one for the team and stayed home to clean. The volume of Christmas stuff that had infiltrated our living room was astounding and it all had to be put away. And, go figure, when I walked in the door after spending half the day at the orthopaedic surgeon’s office, I found that my beloved poodle, Princess, had pooped all over herself and then proceeded to rub it into the carpet in several places. So, I had to bathe her and scrub the carpets. 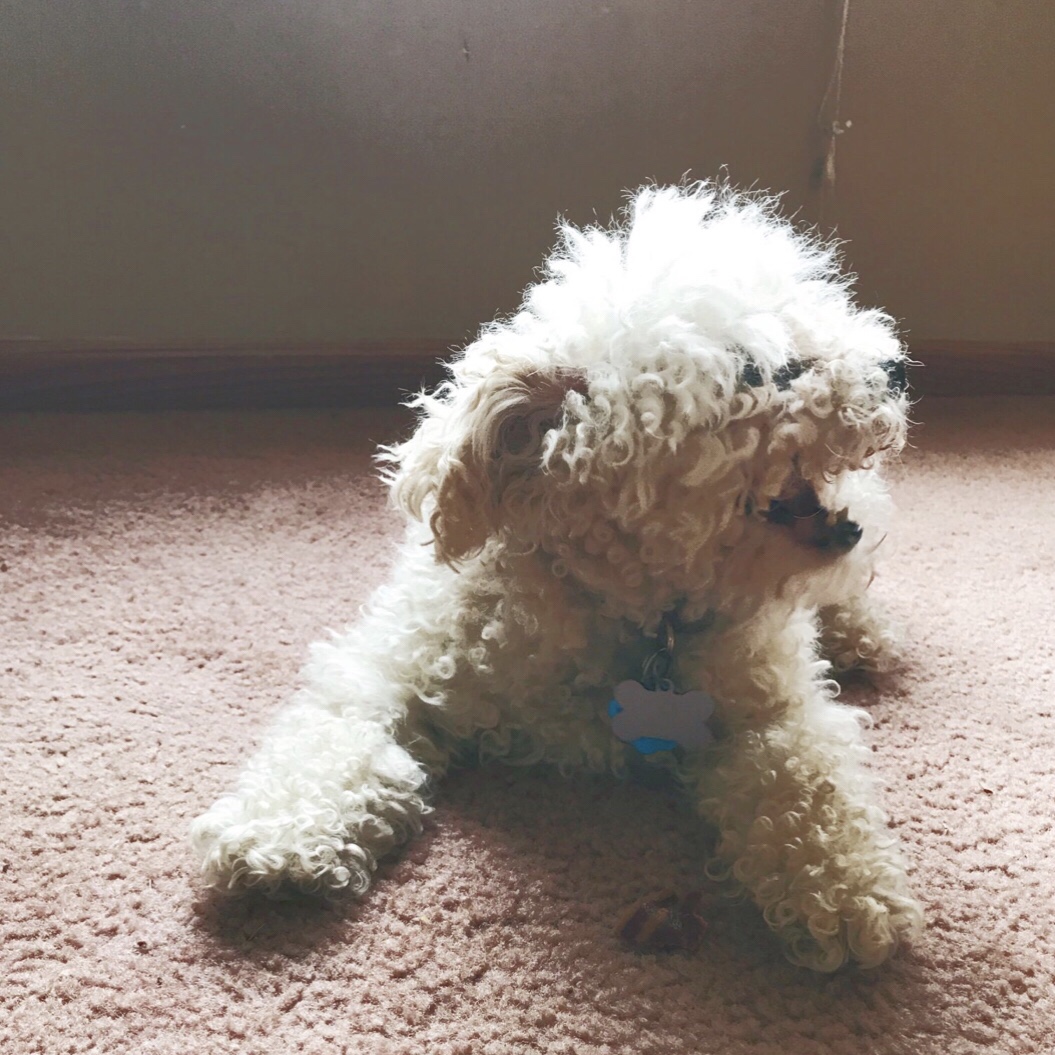 I don’t know about you, but I really need to jazz myself up to get in the mood to clean. Once I get into a rhythm, I can usually clean fairly productively… but getting into that rhythm is the difficult part. I personally like to put in my wireless earbuds and find something motivating on YouTube, which is exactly what I did to tackle this project. I spent much of the afternoon with Tony Robbins in my ear telling me about the power of positive thinking while I loaded dishes, laundry, and garbage into their respective receptacles.

The final task of the evening was to vacuum… and trust me, the carpets were in desperate need of it. I opted to start by the Christmas tree, the area that took the brunt of the Christmas brouhaha earlier in the weekend. A few swipes back and forth and it was clear that the vacuum was not working properly. It was not sucking… or, more accurately, it was sucking at sucking. My general policy when dealing with the vacuum is to let my husband take care of it. Today though, I decided that rather than lean upon someone else, I should just figure it out myself. And I wanted to get the damn floor vacuumed… Now, not later, now. I proceeded to rip the beast apart. 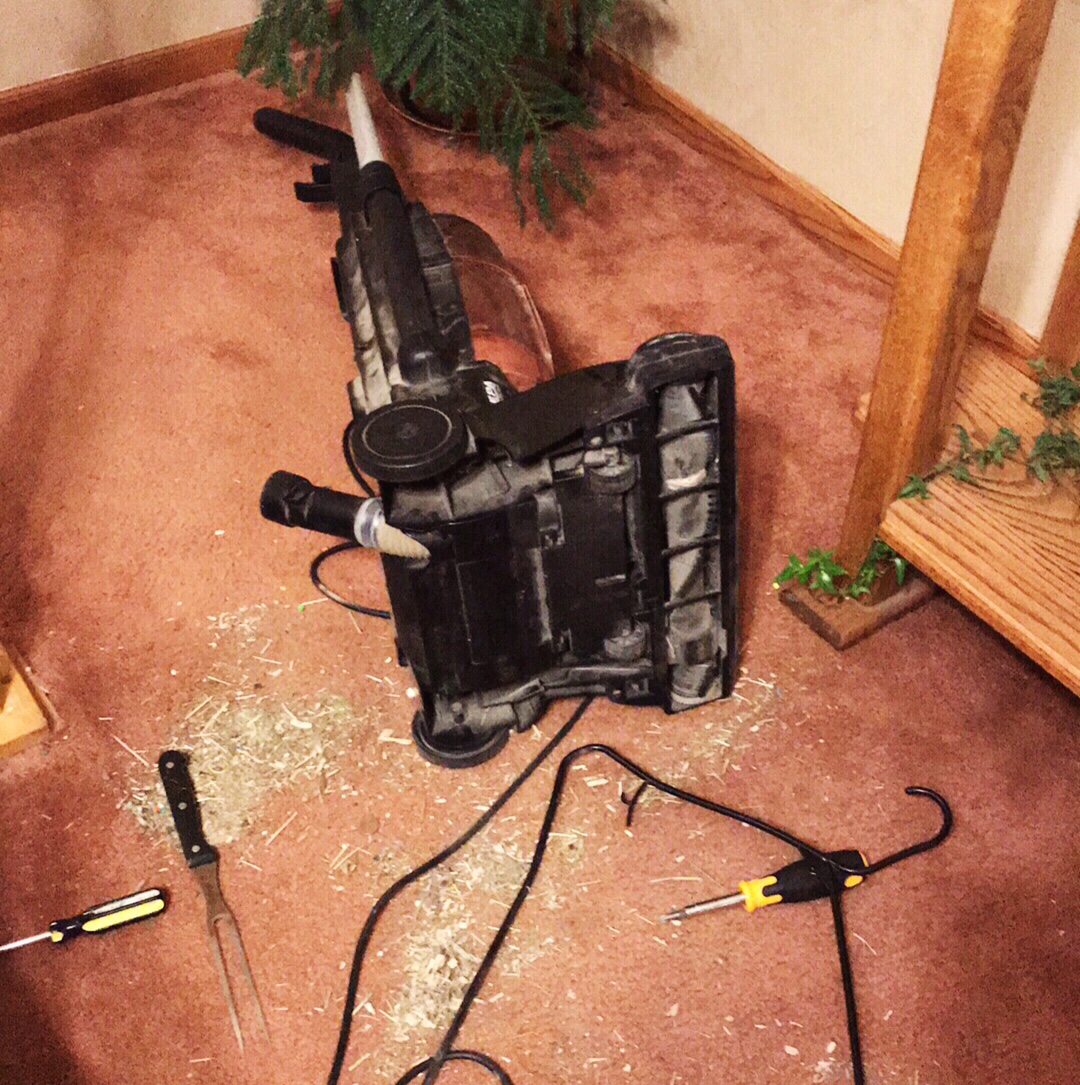 First, I took the main hose off and stuck the broom handle all the way through it to make sure it wasn’t clogged. That is the easiest solution, but of course, that was not the issue. So I flipped it on its side to inspect the undercarriage. After several minutes of trying to make heads or tails of the machine in front of me, I figured out that there was another hose that transferred the dirt from the brushes on the floor, up into the main hose. Was this smaller hose easy to access? Hell no. Was this where the clog was? Yep, sure was.

First, I tried poking a screwdriver down the neck of the hose. I was able to free up some of the debris, but mainly I just pushed it in tighter. Then I tried the end of the broom handle again. That would have worked had the little opening at the base of the vacuum not been hooked just slightly to the side, making it impossible to stick something as thick as a broom handle down into it. My next try was a plastic coat hanger broken at one end. This worked better than the broom handle because it was smaller, and more flexible, but this too was just making the packed wad tighter.

I took a moment to inspect it again and finally saw that the issue causing the hard pack of debris was a piece of balloon shrapnel from Jack’s last birthday. 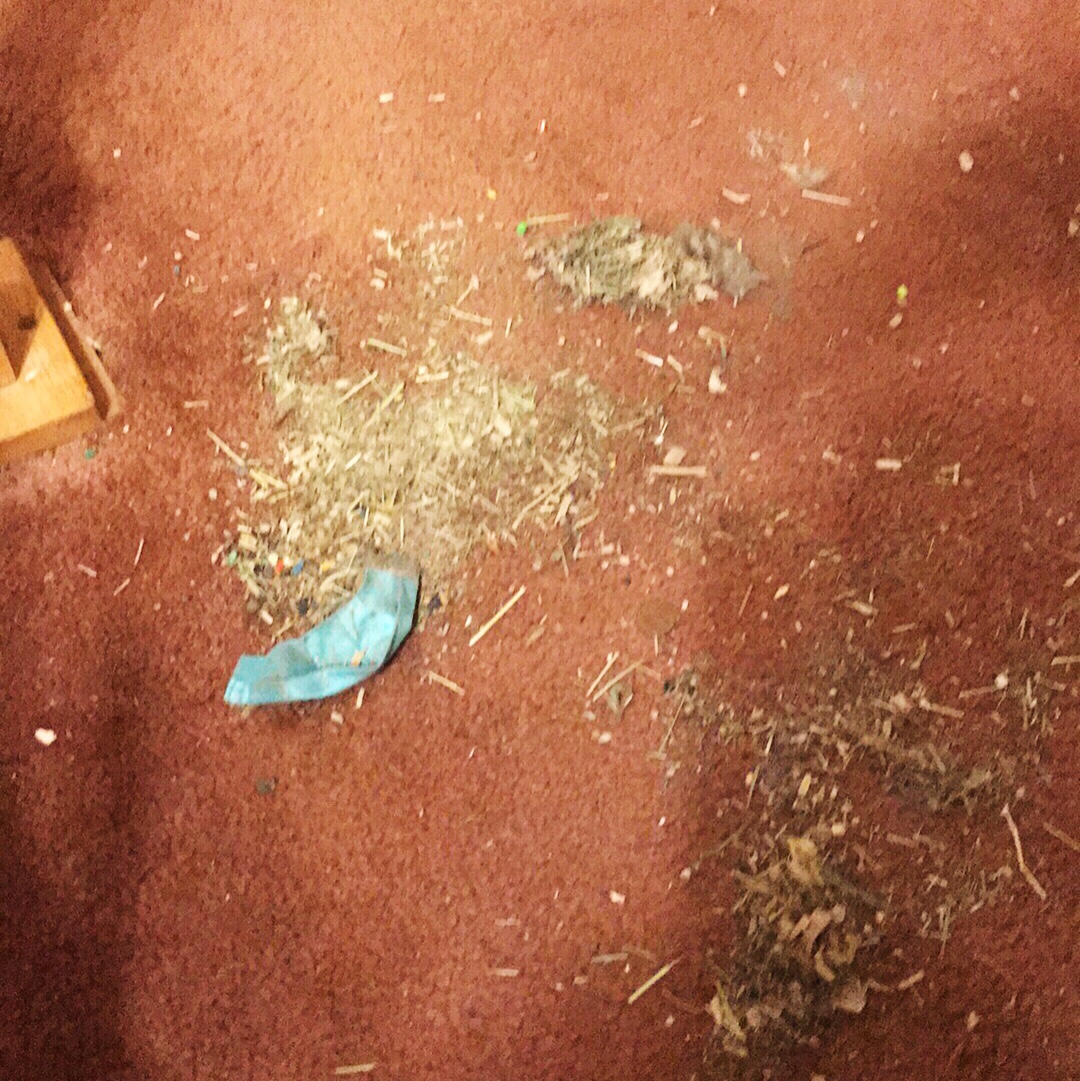 I figured that I needed to find something that I could use to pinch the balloon and pull it out. But that was easier said than done. Everything I could think of (kitchen tongs, tweezers, chopsticks) was either too small or too large or just silly. After a quick runthrough of the miscellaneous drawers in the kitchen, I opted to try the long meat fork that came with our rotisserie. Wouldn’t you know, it worked! I was able to stab that wad of dirt and debris enough that it finally gave in and came loose. Out came the balloon along with three pennies, and a mass of hay from the guinea pig cage in the basement. That’s right, I won. I claimed victory over the vacuum cleaner. And it felt damn good! 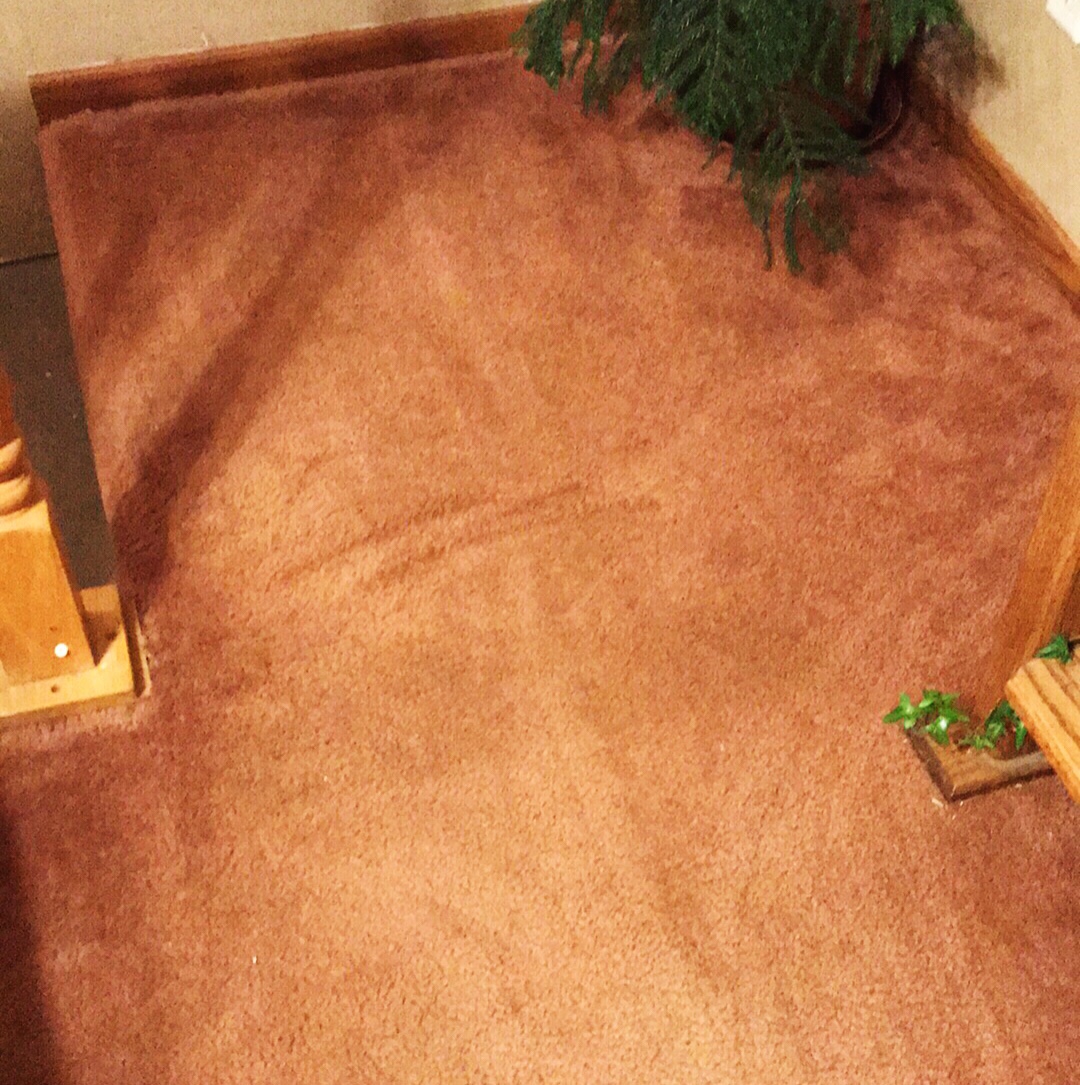